Guest Post by Proliteracy.ca: How Does Free Tuition in Ontario Work?

This post originally appeared on Proliteracy.ca, January 25, 2017 (updated March 2, 2017). We thank Proliteracy for allowing us to share the post on the Canada Learning Bond Community site.

In 2017, the Ontario government is launching the new Ontario Student Grant (OSG), a grant that aims to providing families in lower income brackets enough funding to pay for post-secondary education. OSG replaces a few existing programs and tax credits, the main one being the 30% off tuition program that was part of the Ontario Student Assistance Program (OSAP). Other grants being consolidated under OSAP include the Ontario Access Grant, the Ontario Child Care Bursary, the Ontario Student Opportunity Grant and the Ontario Distance Grants.

The fact that there is no indication of additional government funding implies a re-packaging of the annual funding available. While no precise details have been released at the time of this post, we can safely assume that the grant is distributed based on the families’ income levels. In other words, the more money your family makes, the smaller size grant you can expect to receive.

Many grant eligibility criteria stay the same as before:

Have a look at the following before and after illustrations for students pursuing a university degree: 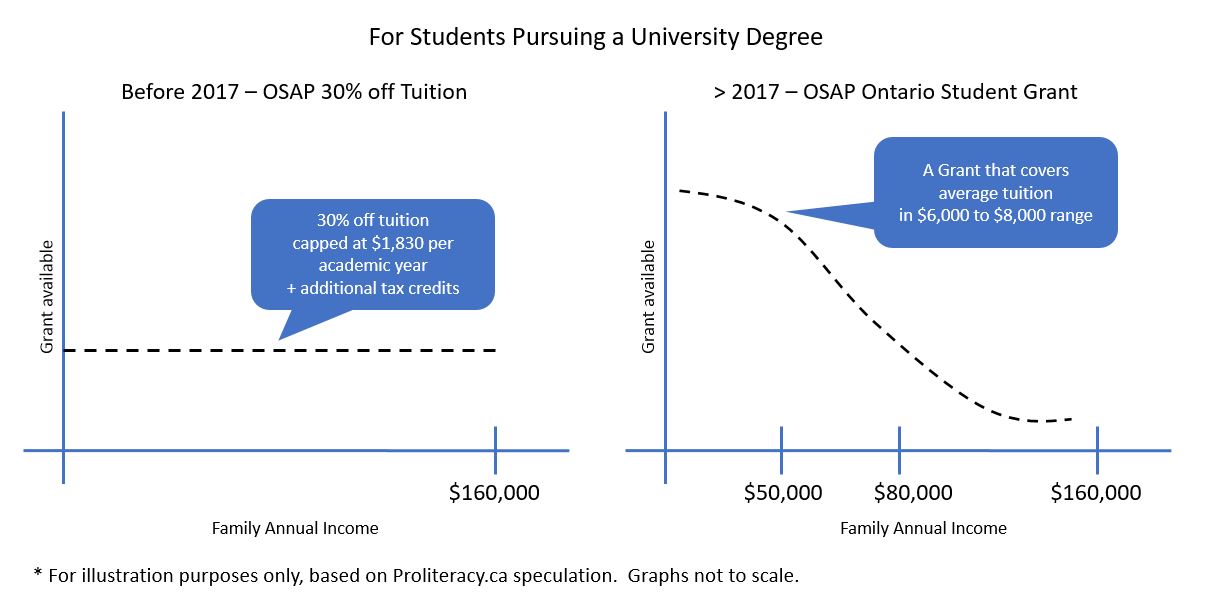 To arrive at the above illustrations, we are assuming that the total pool of funding families would receive under the new Ontario Student Grant is equal to that under the 30% off tuition program plus additional provincial and federal grants and tax credits.

Our speculation is that the Ontario Student Grant will be most favourable to families earning less than $50,000 each year. Families in higher income brackets, especially those that would otherwise not take advantage of the lesser known OSAP grants, may still be better off than before.

That’s it for now. Sign up with Proliteracy.ca to stay informed about new developments surrounding “free tuition” in Ontario.

#EveryChildAnRESP Mommy Blogger: 5 Free Activities to Do with Your Kids

This post was originally published on North Shore Mama, October 6, 2016, as part of SmartSAVER’s 2016 #EveryChildAnRESP Back to School campaign. We thank NorthShoreMama for participating and amplifying our education savings message to help us reach more parents.

When it’s pouring rain all winter long in Vancouver, I am constantly looking for ways of entertaining the kids. While we love to hit up local attractions such as Science World and the Aquarium, these activities can get pricey.  As some fun alternatives, here are 5 free (or nearly free) activities that are great for kids of all ages to help save money!