Save the Camp! A Fun Way to Teach Kids about Money

Since the infancy of the video game industry, developers have tried to meld children’s education and entertainment. While many “edutainment” titles have been the butt of much ridicule over the years, the good ones become beloved classics to the adults who grew up with them. Whether it’s Oregon Trail, the Carmen Sandiego series or something that sparks our creativity like Kid’s Pix, video games have a unique and enduring way of teaching us lessons. When I was a kid, my favourite edutainment game was Odell Down Under, a game that taught kids about the fish-eat-fish world of life in the great barrier reef. Back in those days most educational games were on home computers but today’s kids are growing up with smartphones and tablets, and so that’s where many of these titles have found themselves.

Much has changed over the last few decades, not only in how people play and interact with technology, but significant financial and economic realities have shifted too. In 2015, Stats Canada reported that 71% of Canadian families live with some form of debt. That debt may have been acquired through student loans, a mortgage, credit card bills, or a combination of these sources. Learning to minimize and manage debt will be a skill that children will need to be prepared for by the time they reach adulthood. The temptation to put purchases on plastic is as old as modern credit itself. A young adult’s first taste of paying for something without the immediate sting of dollars flying out of their bank account can be deceptively misleading. Like any problem, prevention is the best cure. Luckily, that’s the objective of Save the Camp!, a free mobile title developed by Toronto based developer Tiny Hearts in cooperation with Meridian, Ontario’s largest credit union, and The Learning Partnership.

At first glance, Save the Camp! looks like your average tower defense title but what makes it special and worth playing is its unique approach. Developed with the aid of educators and financial literacy experts, Save the Camp! isn’t just about repelling hordes of monsters, it’s about repelling hordes of monsters on a tight budget. You find yourself the newly hired camp counsellor for Camp Fortune, a summer camp that is in the middle of a war. The rival camps consist of a whole host of colourful characters and their own head camp counsellors that act as end-level bosses. These characters are memorable, as are your allies, especially your head camper Buttercup who’s been kicked out of all the other camps for a host of comical offences. Like other tower defence titles the object of the game is to repel swarms from getting to their destination by placing attack units along a set path. Resource management is the key differentiator. These units cost money and money is earned in-game through automatic daily income. Very early on the game forces the player to buy necessary units on credit. Levels are divided into weeks and if you don’t have enough money on hand or saved up to pay off your credit balance, your interest rates balloon, your credit limit drops, and you earn less interest on your savings.

I honestly found the game challenging. Any person going into this thinking it’ll be a cakewalk because it’s a children’s education game is in for it. Save the Camp! doesn’t fool around: not paying off your credit at the end of the week sends the player into a bad credit hole that’s nearly impossible to dig out of. The game really stresses the importance of saving and using credit conservatively (and only when needed). Graphically, the game is simple but has a lot of charm and evokes an endearing Saturday morning cartoon aesthetic. It’s also not boated with any of today’s mobile game evils like micro transactions or ads. This game is completely and truly free, its only purpose is to educate. I genuinely had fun with Save the Camp, it is a solid and rewarding tower defence title that has a broader goal which it executes effectively. This can be a great teaching aid for educators or parents, and really has the potential to be one of those classic edutainment titles kids remember well into adulthood.

Paul studied politics and governance at Ryerson University, worked on Olivia Chow’s Toronto mayoral campaign, and continues to be part of the city’s political scene. A total geek polymath, Paul is a well versed in the world of video games, comic books and collectable toys. Twitter: @LordYukYuk / Instagram: @YPSahbaz.

Filing Taxes Can Add $’000s to a Family’s Income

In just a few minutes, Canada Revenue Agency’s online Benefits Calculator, can show a family how much they’re eligible for in Federal and Provincial Tax Benefits…not including the Canada Learning Bonds they could receive for their children.

Christopher and Marietta (not their real names), a married couple in their 30s, live in Ontario with their three children, aged 8, 5 and 8 months old. With a net family income of $37,000, it’s a challenge to afford the $2,000 rent they pay for a two-bedroom apartment.

Using the CRA’s Benefits Calculator, they found out that filing their taxes could help them to receive over $22,000 in Federal and Provincial benefits. 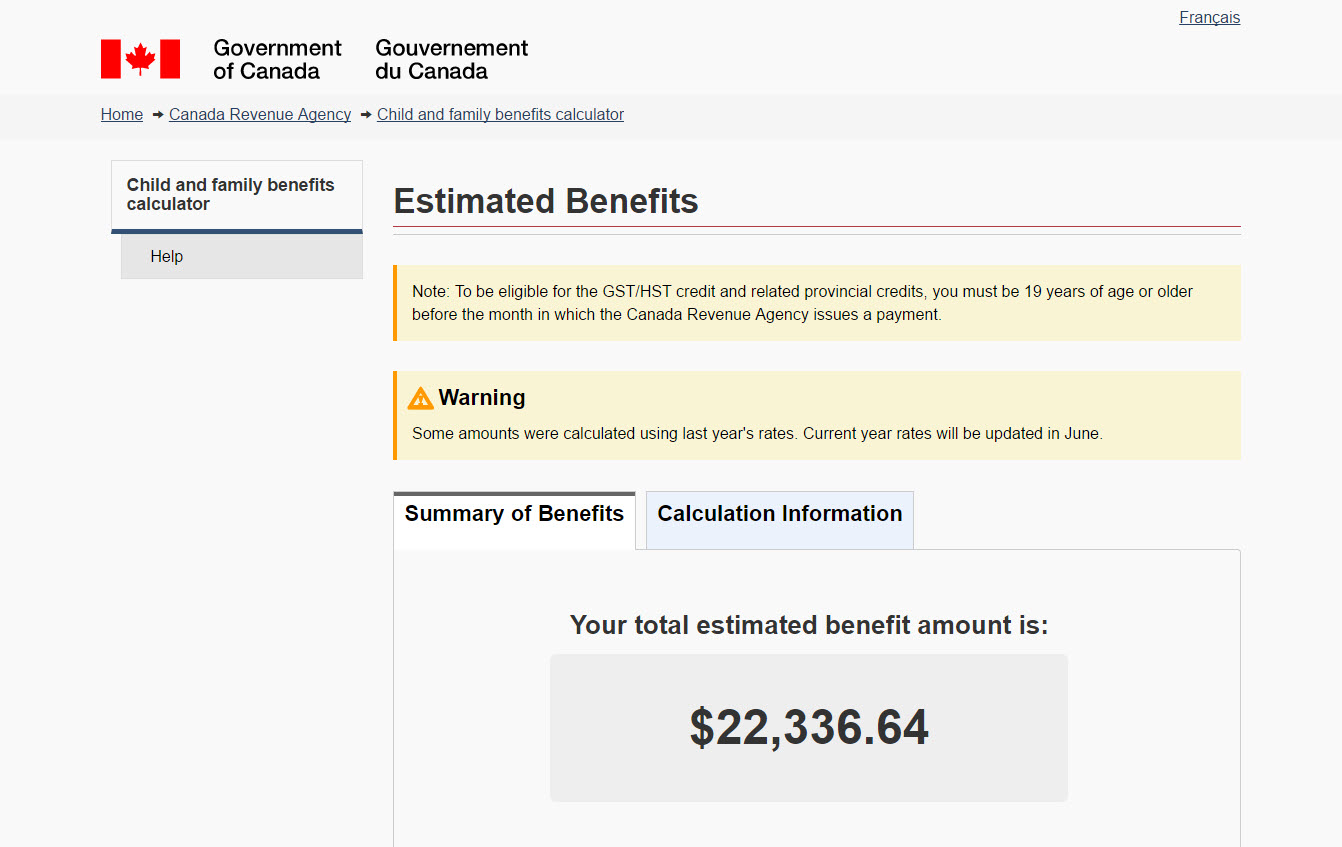 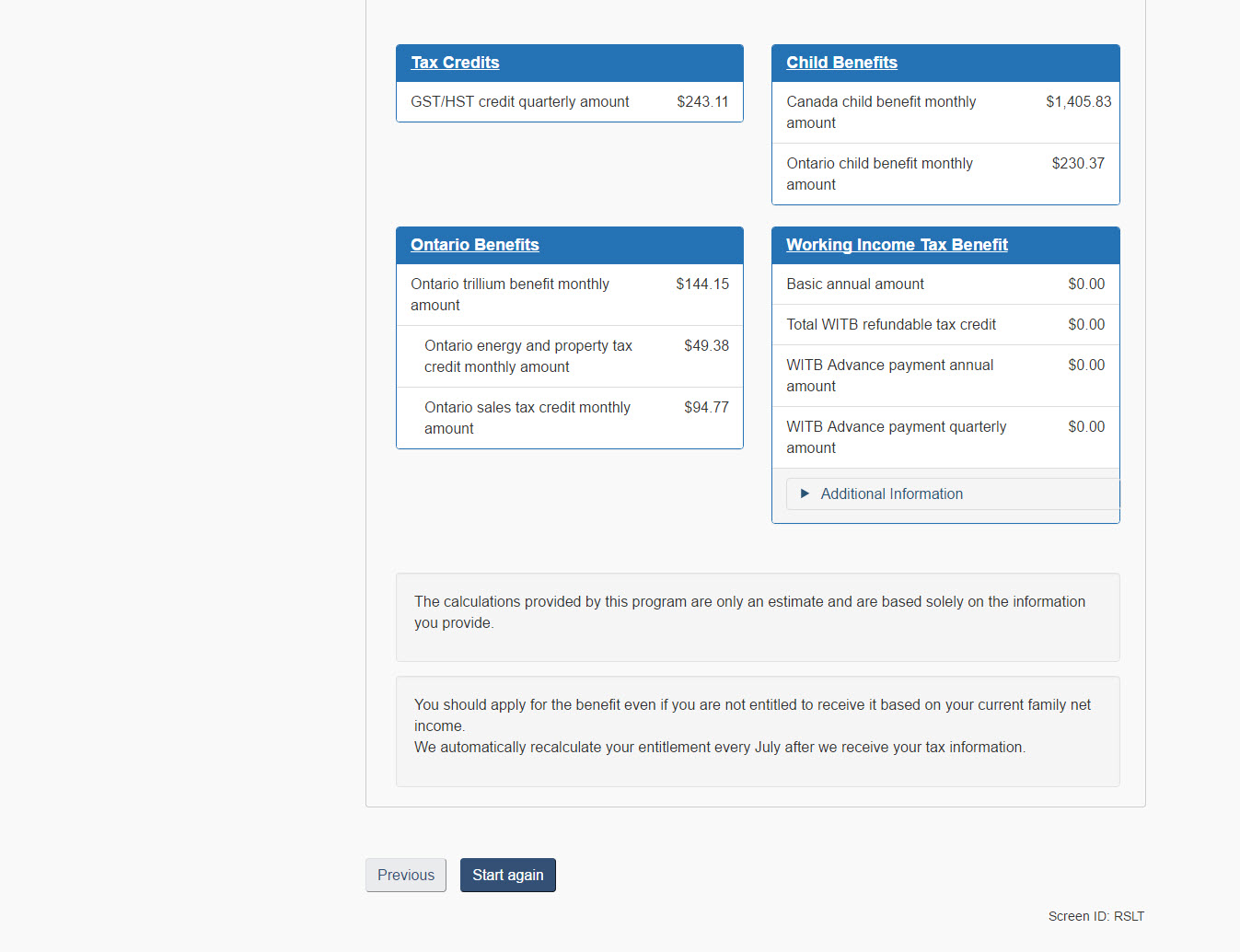