Canada’s largest school board aims to connect 50,000 students with their Learning Bond! 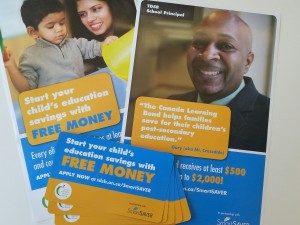 The Toronto District School Board (TDSB) is thrilled to be launching a Board-wide partnership with SmartSAVER to help TDSB families establish RESP accounts and to access their Canada Learning Bond. Through this campaign, we can help an estimated 50,000 students access as much as $100 million dollars in funding for their post-secondary education!

In previous years, TDSB’s Model Schools for Inner Cities have partnered with SmartSAVER, and we’ve seen first hand the hope that accessing the Canada Learning Bond can give to a family who didn’t think having savings for their child’s education was a possibility given their financial circumstances. Helping families to start education savings accounts aligns perfectly with many of our Board’s core values. Research demonstrates that establishing even small amounts of education savings can improve student achievement, education outcomes and equity of opportunity.

Join us for a special launch event onJune 1, 2016 at 10:00 am at Ogden Public School. TDSB Director of Education, John Malloy will officially announce the campaign which is rolling out now and will be joined by TDSB students sharing what they hope to study when they grow up. Stay tuned for more details!

If you’re involved with a Toronto-based organization, please join our city-wide campaign and help us share this opportunity with the families you serve. We’ve established our own webpage and access point to SmartSAVER’s online application through www.TDSB.on.ca/SmartSAVER. To support promotion, we’ll be distributing postcards and posters to elementary and middle schools across the board and for every eligible Canada Learning Bond application generated by ourcampaign, SmartSAVER will donate funds to be used for technology in TDSB classrooms. It’s a win-win! If you live in another community, please share our news with your local board of education.

Together, we can make sure families across Canada receive the money they’re entitled to.

“The Canada Learning Bond provides a tremendous opportunity to make a difference in the lives of low-income children,” said Mayor Bowman. “This valuable program is extremely under-utilized by low-income families, largely due to a number of barriers that prevent access. The steering committee being created will be committed to finding ways to remove these barriers and open up access to existing post-secondary education funding.”

The steering committee will consist of:

Stephen Huddart, President and CEO, the J.W. McConnell Family Foundation, and May Wong, the Omega Foundation, have agreed to support the steering committee in advisory.

“The Winnipeg Promise is the first time a mayor and civic leaders in Canada have rallied around the cause of making sure that every child who is eligible for a Canada Learning Bond receives one,” said Stephen Huddart. “It is of particular relevance to Indigenous children who are underrepresented in receiving this benefit and we hope it serves as a model for the rest of Canada,” said Huddart.

Parents in Point Douglas have identified education as a priority, and access to higher education has been identified as a determinant of health and successful futures for individuals, families, and communities.

The Winnipeg Boldness Project has assessed the Canada Learning Bond as a potential leveraging opportunity for families in Point Douglas, and it became the first Proof of Possibility to be reviewed through the Project‟s social lab process. It identified many different barriers that families experience in accessing the Canada Learning Bond including not having a birth certificate, a lengthy registration process, a lack of trust, or social isolation.

In Point Douglas, a significant gap exists between the number of children eligible to receive the Canada Learning Bond and those who have actually accessed it. Currently, only about 3,300 children access the Canada Learning Bond out of over12,000 eligible children. Closing this gap would allow access to an additional $17.4 million to help fund post-secondary education.

For more information on the Canada Learning Bond, please go to:

For more information about the Winnipeg Boldness Project, please go to:

Office of the Mayor